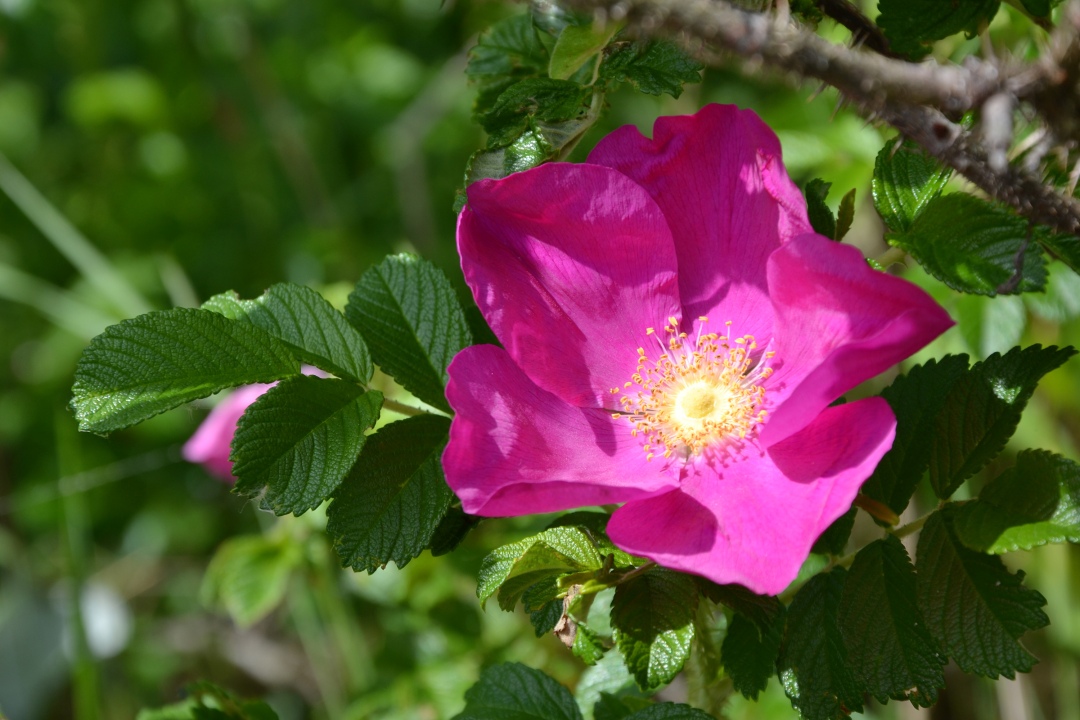 Roses exude charm and beauty but why are there so many different types and where did they originate? Today I’m uncovering the mystery of rose classes and what is meant by Heirloom, Heritage and Old Garden Roses.

B. Old Garden or Heirloom roses

Old Garden Roses sometimes called Heirloom Roses or Heritage Roses date back centuries in some cases as far as the Roman Empire. Today’s post is all about the Old Garden roses but let’s call them Heirloom roses because all of the terms, heirloom, heritage or old garden are in fact the same roses.

These charming old-style roses are enjoying a renaissance of popularity at the moment because the unique qualities they possess are not always found in our modern roses. They have a distinct delicate, beauty and magnificent perfume. Heirloom Roses are a group of roses that according to the American Rose Society, can be defined as a rose that existed before 1867.

It was in 1867 that the first Hybrid tea was introduced in France by nurseryman Jean Baptiste André Guillot, called ‘La France’. He grew the La France rose, creating something extremely important, because until this time, in order to create a new variety, the roses were propagated onto rose wood cuttings or grafted onto rose rootstocks of the intended variety. This meant that no new varieties were introduced. He did it by hybridising a tea rose, ‘Madame Bravy’, with a hybrid perpetual, ‘Madame Victor Verdier’, hence “hybrid tea”. It is said that the majority of all roses grown today are of the modern class of this rose.

La France, therefore, is the first Hybrid tea rose, a union of two classes of roses being a Hybrid Perpetual and a Tea rose. La France Rose is different from other roses because of the high centred bloom that we continue to see in our Hybrid Teas today.  Being durable and tough the Heirloom Roses have stood the test of time. They are highly fragrant, usually bloom once per season and grow quite large. Heirloom Roses today are easy to grow, disease-resistant and winter hardy.

Alba Roses, date back to the Middle Ages and are elegant, tall, slender and upright with blooms that are blush pink or white. The Alba shrubs have a sweet delicate, beauty and grey-green foliage. Albas are hardy and require minimal work, thrive under difficult conditions and are almost disease-free. One of the best features is their ability to thrive in the shade.

Bourbon Roses were discovered in 1817 on the French Ile de Bourbon when a seedling from the Damask rose ‘Quatre Saisons’ and a China rose sprouted up between the rows. This was the beginning of the Bourbon roses. Bourbon roses are compact and vigorous and may have a climbing habit. All of them are repeat bloomers although the first flush will be more profuse followed by more blooms until Autumn. The blooms are large and magnificent, in colours of white, pink or red to deep bluish-purple with a heady scent. One tip is to leave pruning for 2-3 years because they flower on old wood. The foliage is a deep green and grey with red edges and best of all Borbon roses are almost thornless.

Centifolia Roses we know as cabbage roses were first bred in the 1500s. As the name Centifolia implies “hundred petals” these too appear to have a hundred tightly packed thin petals that overlap just like a cabbage. Because they were grown in Provence France they are also known as Provence roses. Colours range from white to deep purple and are highly fragrant. Centifolia roses only bloom once and like to grow in full sunshine.

China Roses are the variety that has given modern roses the continuous blooming ability. They are more tender roses, disease resistant and dislike cold but grow into compact bushy plants. Many China roses are perfumed in lots of colours and ideal for a small garden or pots. The varieties available in Australia are Cecile Brunner, Duke of York, Bloomfield Abundance, Archduke Charles, Louche, Irene Watts, Mutablis, Old Blush, Papillion, Princess of Sagon, White Cecile Brunner, Fabvier, Hermosa, Perl d ‘Or, Le Vesuve and Mme Jules Thibaud.

Damask roses are the roses grown for their amazing fragrance and grown for the perfume industry. They include some of the oldest roses in the world dating back to biblical times and bought to Europe with the crusaders.   The plants are elegant, upright with pale green leaves and loads of thorns. The flowers are stunning in whites, pinks or reds. They bloom only once and have stiff arching canes. Damask roses available in Australia are York and Lancaster, Rose Dhivers, Trigintipetal, Quatre Saison, Omar Khayam, Mme Hardy, Leda, Ispahan, Hebes Lip, Le Ville Bruxelles, Celsiana, Botzaris and Blush Damask. In the UK there are some other Damask roses are St Nicholas, Kazanlik, Petite Lisette, Mme Zoetmans, Marie Louise, Glorie de Guilan and Oeillet Parfait available if in the UK at David Austin

Moss Roses are Centifolia roses and Damasks that have developed a moss-like growth on the sepals of the blooms by a sport or mutation. They have a distinctive fragrance and small hairs with scented glands on the bud. They have double flowers in all colours and are very fragrant.  Although the early Moss roses only bloom once the more modern hybrids repeat well. These roses were very popular during the reign of Queen Victoria. Available in Australia are Alfred D Dalmas, Captaine John Ingram, Chapeau d Napolean, James Mitchell, James Veitch, Japonica, Mme Louis Leveque Nuits d Young, Quatre Saison Blanc Mousseux, Robert Leopold, Shailers White Moss, Soupert et Notting and Willaim Lobb.

Noisette roses are tall, bushy roses that are similar to climbing roses, for example, the popular Crepuscule rose. These roses were the first roses to be bred in the USA by John Champneys in 1811. Noisette roses have given us the bright orange and yellow colours we see today in modern roses. They bloom continually all season and grow in scented clusters. The Noisettes are a charming rose, willowy and delicate and one of my favourites. My crepuscule roses bloom and bloom from Spring to late Autumn and are extremely low maintenance. They were also crossed with tea roses which produced large, single blooms, instead of clusters of blooms, such as Madame Alfred Carrière (1879) and Maréchal Niel (1864). Readily available from many nurseries are Crepuscule, Lamarque and Mme Alfred Carriere. These and other less common Noisettes are available from Ross Roses at Willunga including Rev d ‘ Or, Marechal Niel, Jaune Desprez, Jaques Cartier, Cloth of Gold, Celine Forrester, Autumnalis, Blush Noisette, Claire Jacquier, Champneys Pink Cluster and Alister Stella Gray.

Polyantha Roses are the forerunners of the modern Floribunda. Like Floribundas they are the most prolific bloomers of all roses. They grow in a compact way to 50-90 cm high and have large clusters of small blooms with small, narrow and often cascading foliage. These roses are hardy, disease-resistant and perfect for containers and pots. I have the Fairy a well known Polyantha growing well in an old wheelbarrow. The Fairy available through Treloars and Little White Pet from Wagners in Australia and the less well-known Polyanthas such as Anna Maria Montravel, Baby Alberic, Marie Pavie and Mrs Maud Alston from Ross Roses at Willunga

Tea Roses originated in China and are the roses we get our modern Hybrid Teas from and are a cross between a China rose and Rosa Gigantea. They were imported on the Tea Clipper ships to Europe and instantly loved for the stunning fragrance and gorgeous delicate colour and form. Tea roses to me are the true old-world roses some with their distinctive 5 petals and lovely, old fashioned appearance. These Tea Roses below have been planted in my garden and new 2019 photos will follow.

Hybrid Musks pictured above were planted in my garden last year and new 2019 photos will follow this season.

Hybrids are a miscellaneous group of roses sometimes grouped with modern shrub roses and include roses produced in the 1900s with mixed parentage these include the following types;
Hybrid Musk Roses, these were bred in the early 1900s and are a mix of Hybrid Teas, Tea and China roses and some of the early ramblers. They are large, bushy roses with arching canes and beautiful flowering growth. These are fabulous strong roses, disease resistant and they like poor soils and shade to a certain degree. Buff Beauty is a fine example being very fragrant and a prolific bloomer. Others in the Hybrid Musk class are Autumn Delight, Ballerina, Cornelia, Felicia, Lavender Lassie, Menja, Penelope, Prosperity, Thisbe, Vanity and Sally Holmes. My garden has many of the Hybrid musks and I look forward to photographing them in full bloom this year.

Hybrid Rugosas were originally from the coast of Japan and are popular for their hardiness, spicy scent, crinkled foliage, and disease resistance. They have lovely single flowers of 5 petals and come in white, pink, red, purple, and yellow. Also, the Rugosas have fantastic edible full red rose hips that are quite large. They love to be left alone and do not demand much attention and do well in areas that have poor soil. Rugosas available in Australia include Blanc Double de Coubert, Conrad F Meyer, Corylus, Frimiata, Henry Hudson, Roseraie De Lhay, Rugspin, Sarah Van Fleet, Schneezwerg, Scabrosa, Rugosa Alba, Souv De Philemon Cochet, Martin Frobisher, Conrad F Meyer and Fru Dagmar Hastrup.

Hybrid Kordesii is a cross between Rugosa roses and Rosa Wichurana. They are popular in the Northern hemisphere because they are winter hardy and have dark glossy foliage. They are usually a red, short climber named for German breeder Reimer Kordes.

Whatever the rose type is growing in your garden they may appear, because of the delicate blooms to be fragile, but are in fact hardy, tough, and resilient plants. They will like and flourish for you if you give them

“At the heart of gardening, there is a belief in the miraculous” – Mirabel Osler

My love of roses, gardening and country life is the inspiration for my writing in aroseisaroseisarose.com When I’m writing, I think of the rose garden, and when I’m in the garden, I think about writing- such is life. I hope you enjoy my add free stories and be inspired to grow a rose or two. Di 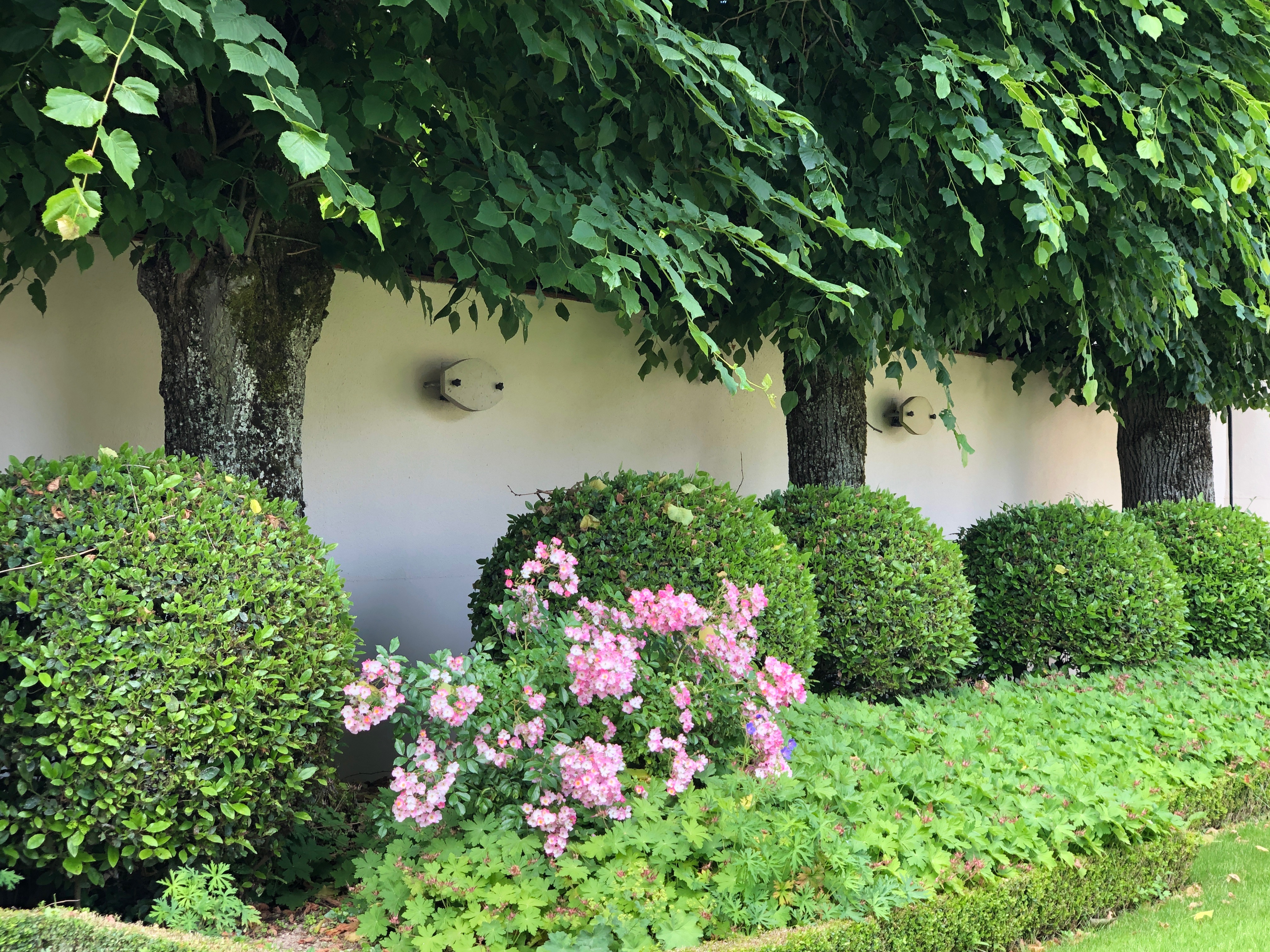 Gardens of The Architect 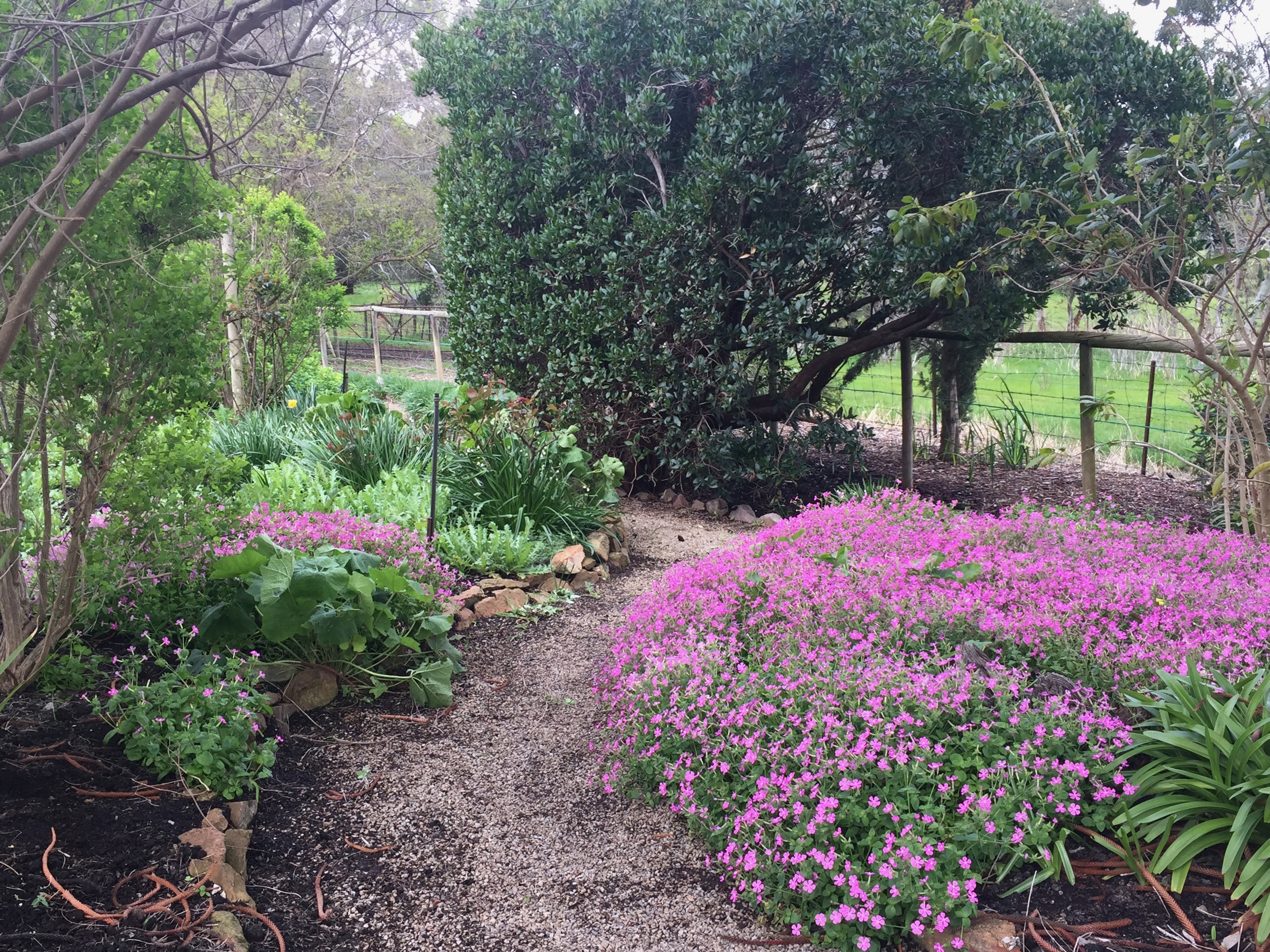 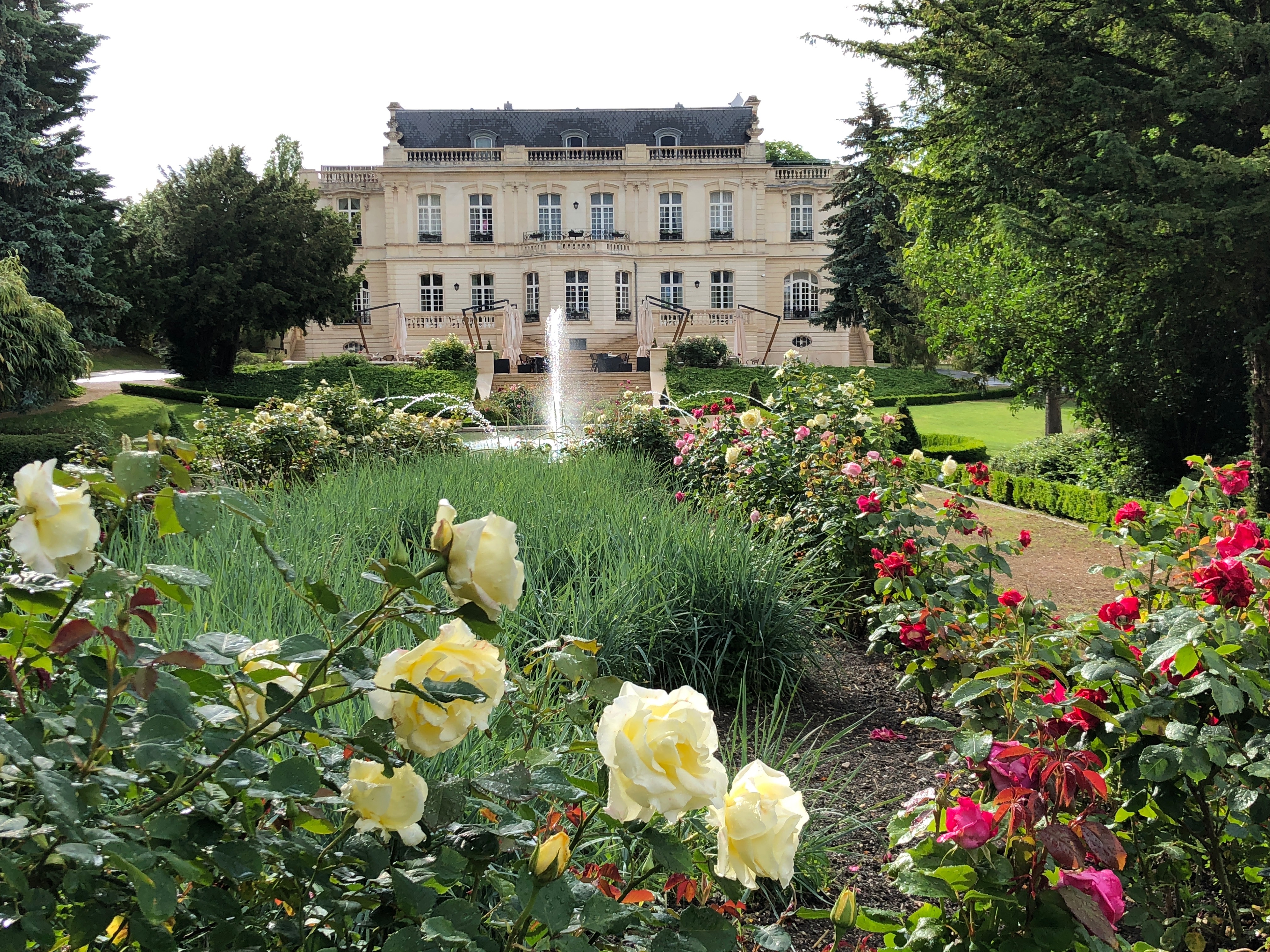 There is no “End” to be written, neither can you, like an architect, engrave in stone, the day the garden was finished. A painter can frame his picture, a composer can notate his coda, but a garden is always on the move. Miracle Osler

“A simple cup of tea is far from a simple matter.”