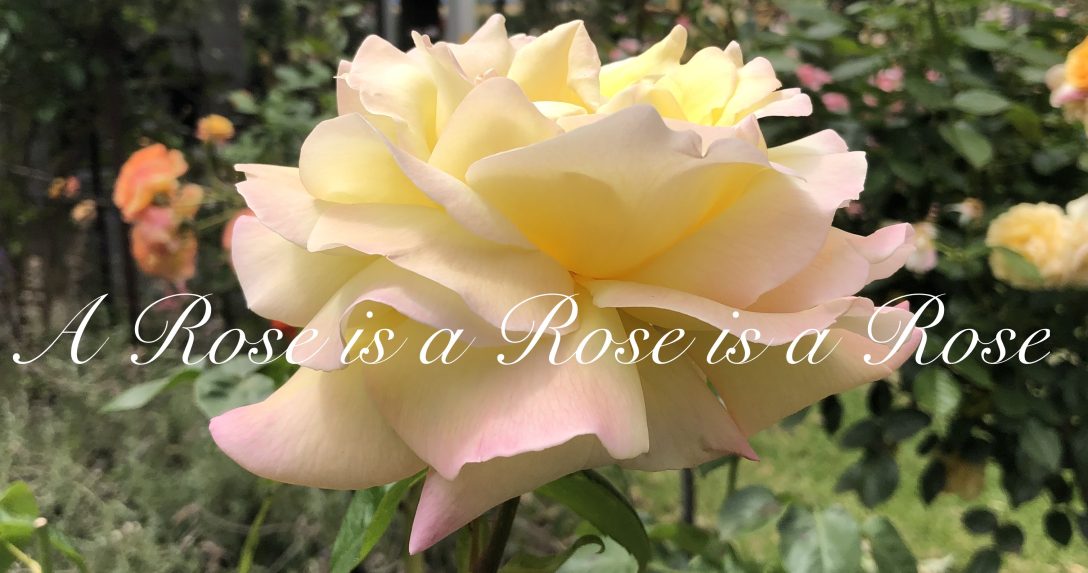 My garden has always been an experiment to see if, despite the rural location and tricky climate, creating an inviting, lush and colourful outdoor space was possible. I’ve tried things out with no certainty that the plants would grow and there have been many setbacks and disappointments. As time went by I’ve become more informed and with every mishap, gained valuable experience plus as a bonus I developed a lot of patience. I have given it my best shot this year and so far it seems to have paid off.

There are so many perfectly formed healthy roses opening that look fantastic, smell divine, and have no signs of the dreaded pests or malformed roses that heat, drought, and frost usually create. The opportunity of the higher rainfall, the not so cold winter and far more time spent hands-on in the garden are the keys to a colossal improvement. Not forgetting that time has passed as well, and roses, although fabulous in their few first years, to a degree, do take time to get established and to bloom as we envisage from the rose growers pictures and descriptions.

The size of some blooms this year is amazing, and one almost does a double-take seeing the new flowers each morning. We have had a lot of rain again in the past few days, so the photos are not great. However, there is an intense sense of promise in the air as thousands of buds are visible on many, many plants ( far more than I have ever seen) and just begging for the sun to shine.

Westerland Rose that grows outside the fence under an old farm stand has just one bloom open that will become deeper in colour as the season unfolds. What is striking is the size of the bloom – it is double what I saw last year. Westerland is a vigorous thorny rose with a spicy clove fragrance and serrated dark green foliage. Bred by Reimer Kordes In 1969, Germany as a climbing Shrub rose. It is hardy, does not appear to mind the heat and strong sunlight and is said to grow over 3 metres.

Reines de Violettes is the rose pictured here in a deep mauve velvety colour. If only the internet could let you smell the perfume – it is heady and very fragrant. Sometimes called Queen of Violets, this mauve rose is a Hybrid Perpetual Old Garden rose bred by Mille-Mallet France in 1860. I planted this one in my Tea Garden with lots of lavender and contrasting Twilight Glow roses. It is stunning and grows in an arching manner but has few thorns, and the flowers grow in a cupped, quartered form that lasts when picked.

A new favourite is a vivid and distinctive rose – La Jago. I see it from the kitchen window, and the colour is intense and really eye-catching. It has enormous thorns, but I have not been stung by La Jago I guess because being so large; you can see the thorns easily and avoid them. One of the best features of La Jago is that the vibrant blooms stay on the bush for a very long time. The first bloom to open is where I can’t reach it to photograph, but the flower has not moved despite thunderstorms, rain and windy days for three weeks and is still just sitting on the end of a long arched cane.
La Jago is a Hybrid Tea Delbard rose bred by G Delbard, France in 1997. It came to Australia as part of the Couture Collection by Melville Nurseries in 2006. It is sometimes called La Passionata. La Jago is named after the milliner from Melbourne, Peter La Jago.

The long-awaited semi-formal garden room is now underway, but not without a few changes and the odd mistake. The concrete surrounds were made to be two garden beds for herbs, a few green vegetables, and coloured annuals. On placement, my husband liked the idea of one large circle, so I agreed. To start, I needed to remove the grass, so after a spray of organic slasher, I killed the lawn in a circular area ready for placement of the garden bed. Then, contrary to the expert advice from the local nursery, the surrounds did not sit well as one large circle, so we placed them in the original design. Hence the reason the lawn is dead in the centre, but will no doubt be green again soon.

It is early days, and I’m only halfway through with a lot of weeding to do along the front garden bed and the remaining lawn. But at this stage, growing in each circular bed will be a Paul Cezanne rose, a range of mixed lettuce, chives, lobelia and trailing petunias. I lay a commercial weed matt down after digging a hole for the rose and filled it with top quality potting mix and then planted it out. It has been raining since so no more photos are available.

Along the front fence line, there are several quite large rose bushes that are now into their fourth year. One being a beautiful Rose ‘Souvenir de la Malmaison.’ It is by far the most special rose in my collection because it dates back to 1843. Bred by Lyon rose breeder Jean Béluze, who named it after the Château de Malmaison, where Joséphine de Beauharnais 1763-1814 had created a magnificent rose garden. She was the French Empress and the first wife of Napoléon Bonaparte.

Although this Bourbon rose is beautiful with its quartered, very full large blooms that open flat from gorgeous huge buds, it does rot easily in wet weather. There are many in bloom at present but the rain has weighted down the laden rose bush and some blooms are slightly rain damaged. This rose is susceptible to mildew, blackspot and does not like being pruned but, it is lovely, with light green leaves that are large and glossy. The flower colour is palest pink with a significant tea rose fragrance, and best of all, the bush is almost thornless.

Along the path, the soft silvery foliage of Stachys Byzantina – Lambs ears grow with French Lavender and a new archway with climbing roses plus the original standard roses. The path garden will create the idea of a wall to one side of the Potager and three large palm trees form the other enclosure by the pool fence. Along the fence, Buff Beauty roses grow in large pots. These are right now poised to open into bloom any day. All these elements plus a garden bench will create a semi-formal garden room that only time, will tell if it’s successful.

All Images from Bona Vista Garden 2021